Muted Words allows you to mute specific words or phrases from appearing in different parts of Twitter.

This feature was a big step forward for Twitter, because customers had no way of controlling their timeline at the content level. At this time customers could only control content at the user level with actions like Follow, Unfollow, Block, and Mute. These user level tools are mostly reactive, meaning you have to wait until you discover a bad actor to take action. With Muted Words you could proactively combat abuse which is really cool.

I closely collaborated on this feature with Michelle, a Product Manager and the DRI for this project. Kathie, our user researcher, and our Engineering lead Sung. The four of us made up the core team. I also worked closely with client engineering for all four supported clients (iOS, Android, Mobile web, and Desktop Web) content strategy, and marketing.

The three primary use cases: 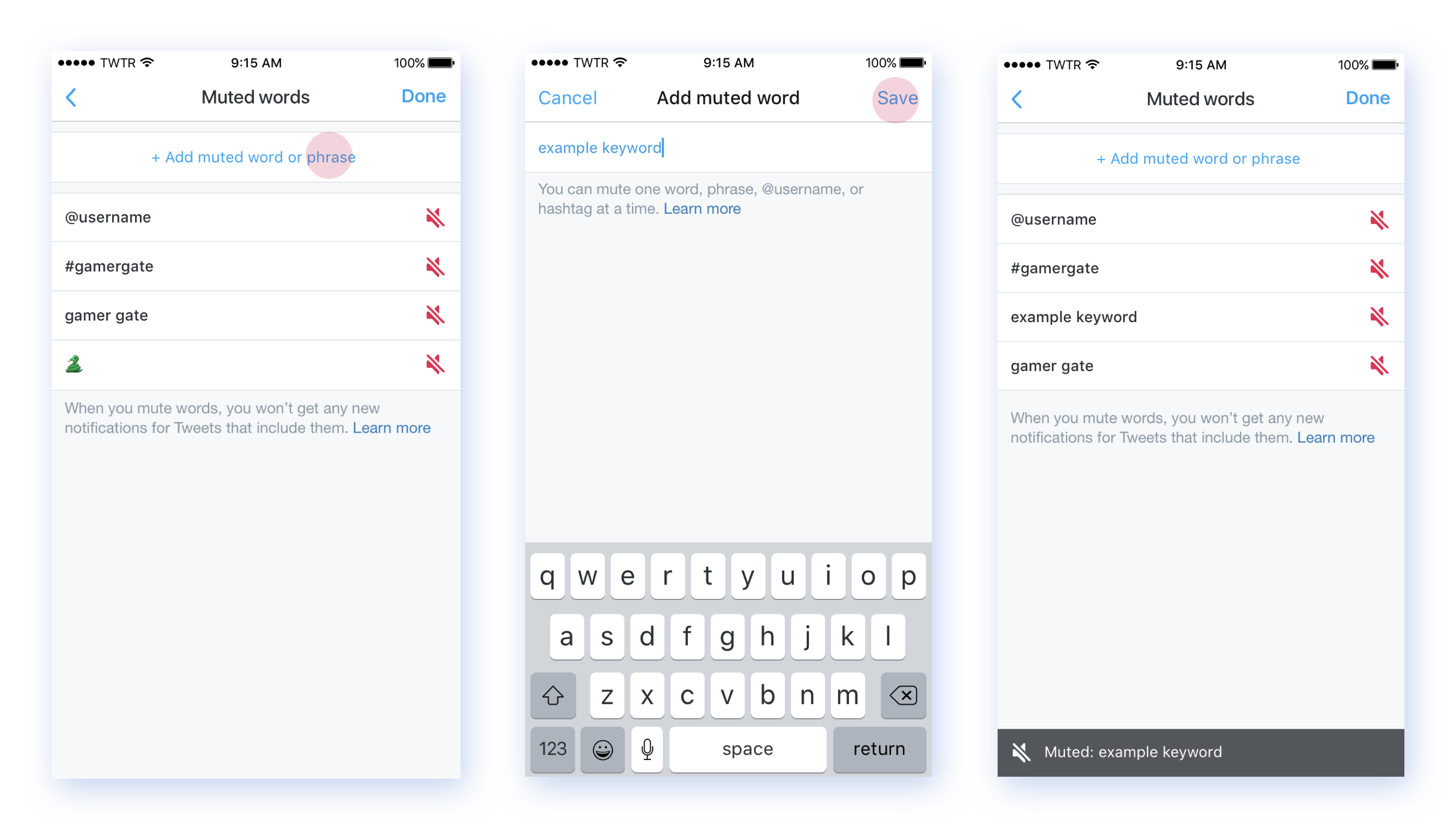 Early on, engineering was doing initial due diligence, a huge technical roadblock was discovered. There was no way on the backend to actually filter Tweets based on keywords due to how the backend had been architected many years ago. This forced a choice to be made. Should we delay this project until the backend can be updated completely for this feature, or, are there other options?

Because we were focusing on the abuse use case, and we already knew through research that customers primarily experience abuse through their Notifications tab… we decided it would be a net positive to abuse victims to go ahead with the project.

From there we formed some base constraints:

We built V1, and launched in tandem with Mute Conversations in November 2016. Mute Words launched to positive reactions from The Verge, The Guardian, NY Mag, and PBS among others. Customers muted over 1 million words in the first two weeks!

After launching V1, we almost immediately began integrating what we had learned from the launch and started working on V2. A cool and sometimes not so cool part of working at Twitter is that customers would tell you exactly what they thought about new features. We were really motivated to make V2 the best it could be. 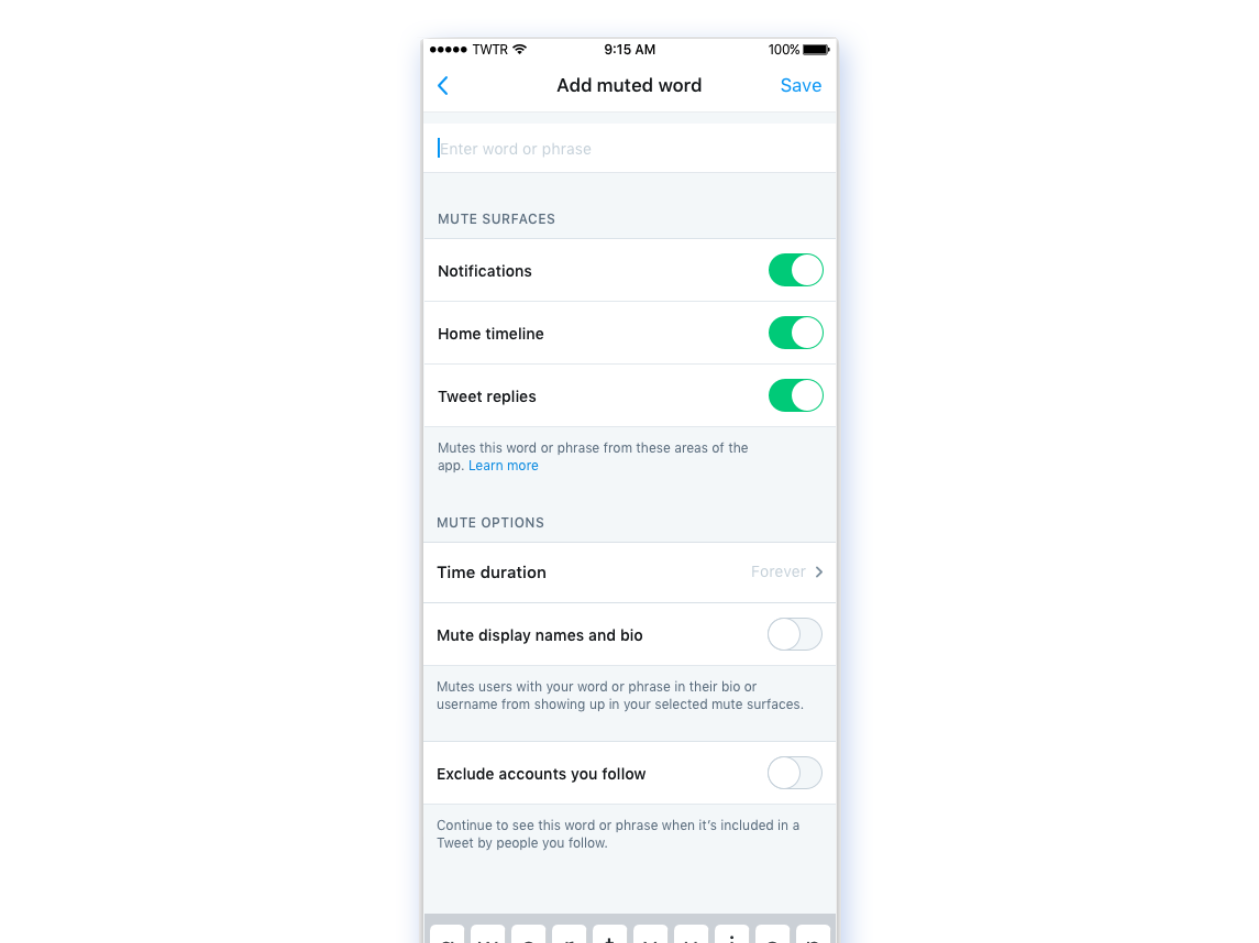 Here’s an early stage mock from V2… at first we really wanted to put every idea we had into this feature. We knew we needed to add the ability to mute words from the home timeline, but we also thought about adding muting to even more surfaces of the product like Search, Replies and Moments.

Through research we had learned that customers were reluctant to use the feature out of fear of missing quality content from people they care about. For example you might not want content about a particular topic, but if a friend mentioned you to take a civic action on that topic you’d be interested. The success of this feature depended on us figuring out a solution to this problem.

We also wanted to reduce costs for Twitter. It was expensive to check against words that had been intended to be used for a short period of time. For example if you muted Super Bowl, you wouldn’t get a lot of matches for most of the year, but Twitter would still be checking every Tweet in your timeline for Super Bowl. To solve for this, we decided to add timed durations per each word.

Another idea we had was to mute based on the contents of the user’s bio. For example if you muted the snake emoji, and someone mentioned you with the snake emoji in their bio that would be muted from you. We thought this feature was incredibly powerful in the case that you feel the user is a bad actor. It ended up being too complex for most average users to understand, and the screen was very full of granular options so we scrapped it for simplicity. 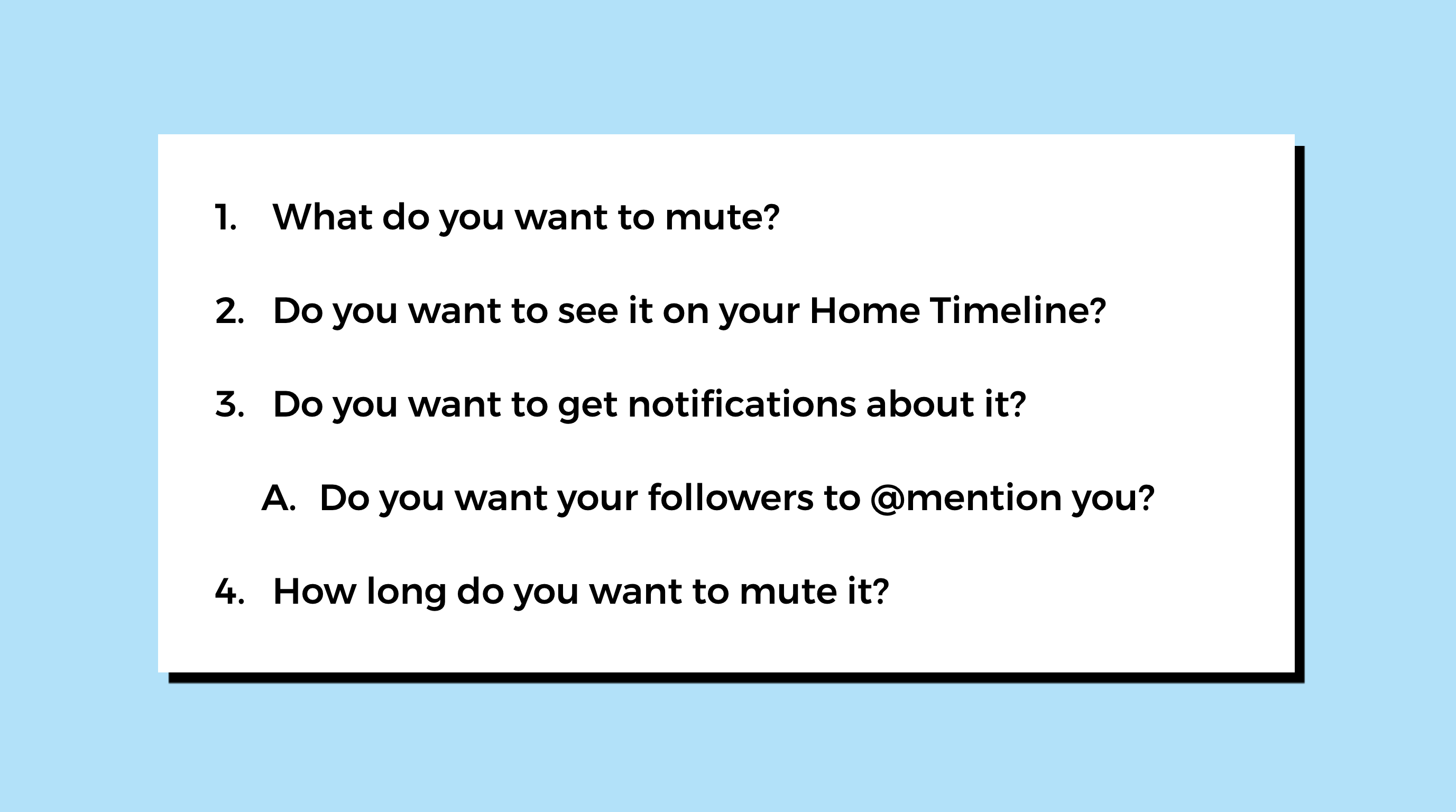 While many of our more advanced customers would enjoy many of the features from our early explorations we decided to really pare things back after a crucial user-research study. Together with product and research we simplified the feature down to a few simple questions:

After we narrowed down our scope we were ready to execute pretty quickly. We were able to iterate and get everything into engineering within a six weeks. 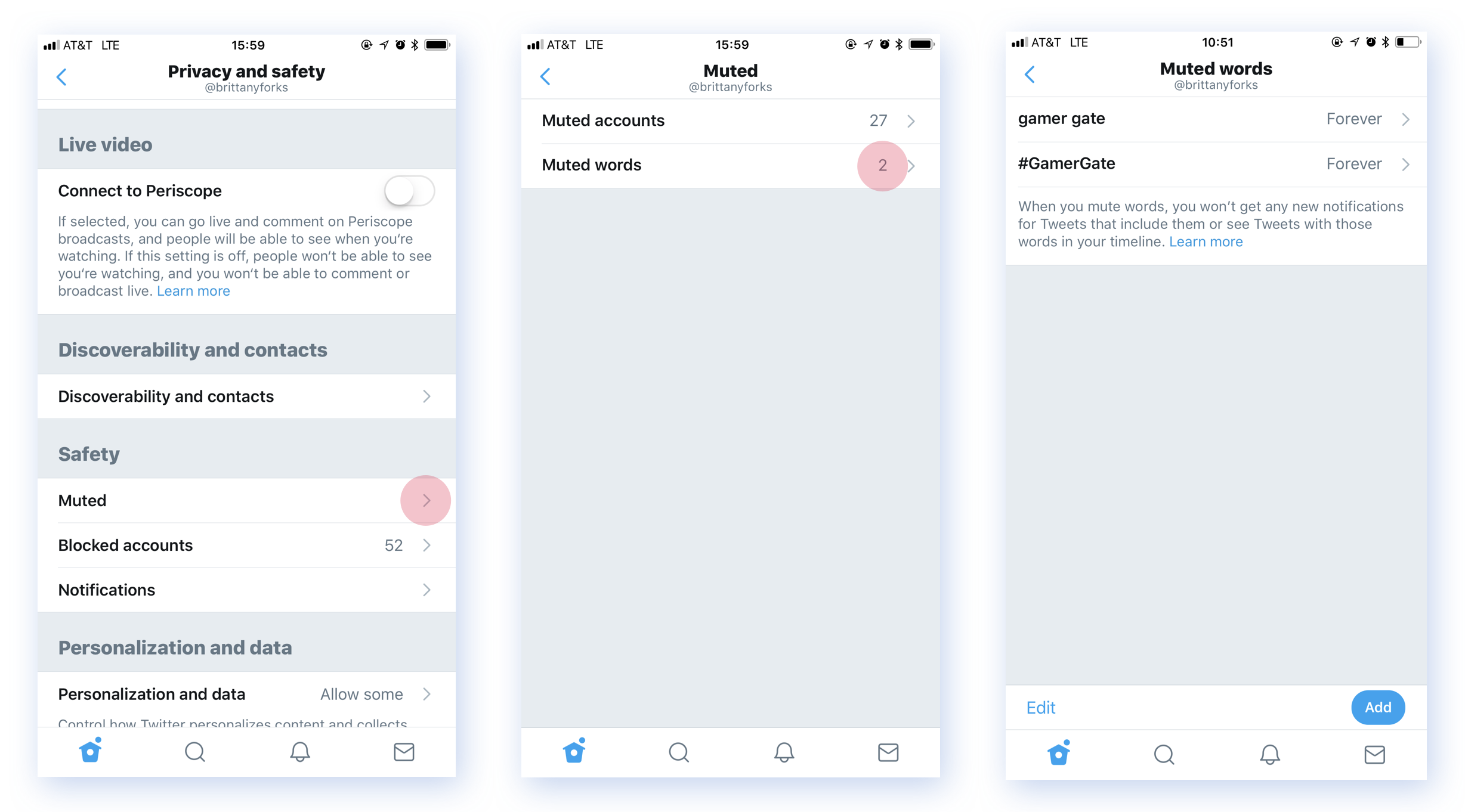 With V2 we added muting words from your Home Timeline, timed muting, ability to edit words, sticky settings, bulk deletion of words, and increased the limit of muted words from 100 to 200.

We launched V2 in just under six months, in March 2017. Mashable, Quartz, and Vanity Fair wrote about it. To date over 17 million words have been muted by over three million customers. 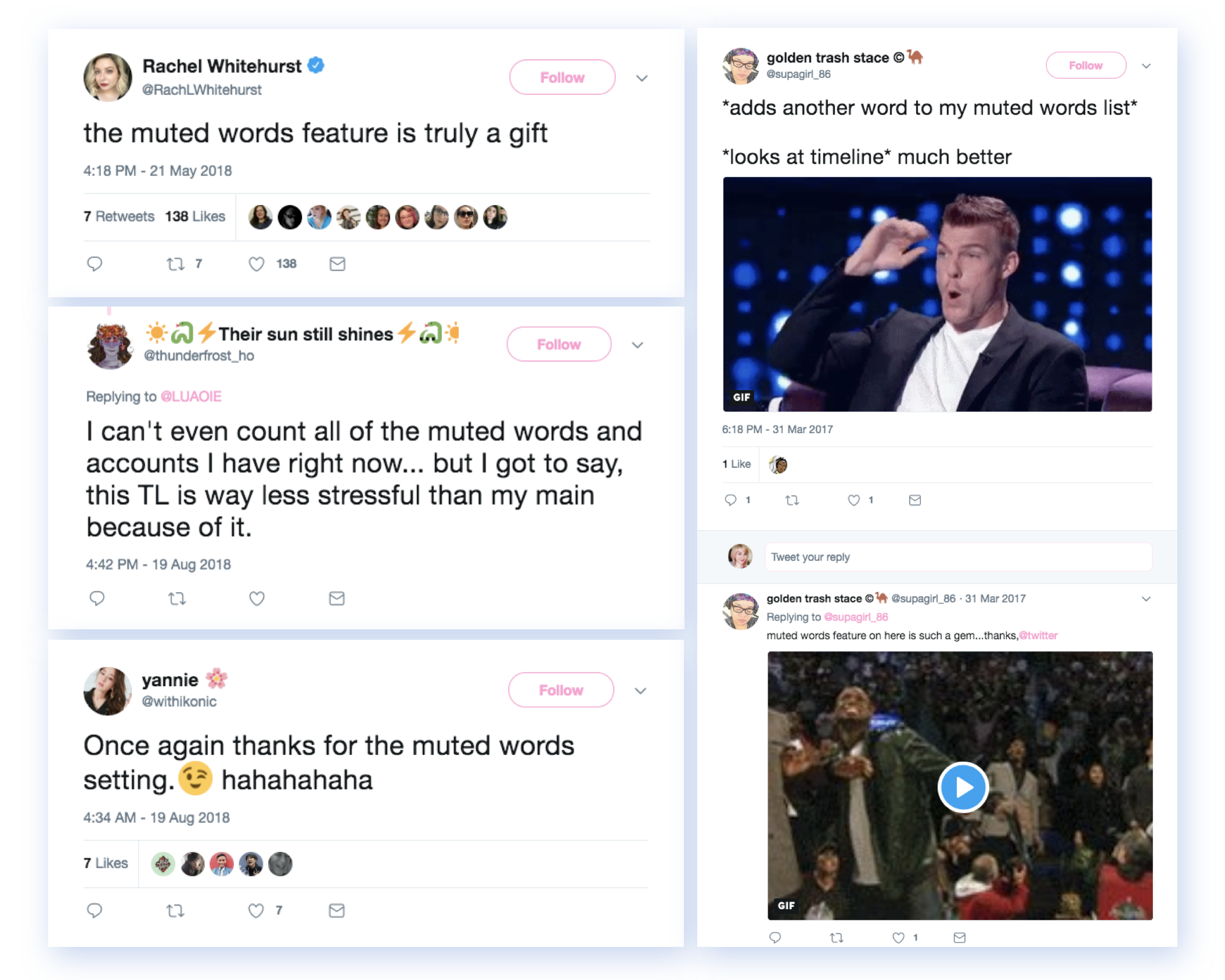 What customers say about Mute Words